Fifteen-year-old Christopher has an extraordinary brain. He is exceptional at mathematics but ill equipped to interpret everyday life. He has never ventured alone beyond the end of his road, he detests being touched, and he distrusts strangers. Now it is seven minutes after midnight, and Christopher stands beside his neighbor’s dead dog, Wellington, who has been speared with a garden fork. Finding himself under suspicion, Christopher is determined to solve the mystery of who murdered Wellington, and he carefully records each fact of the crime. But his detective work, forbidden by his father, takes him on a thrilling journey that upturns his world. 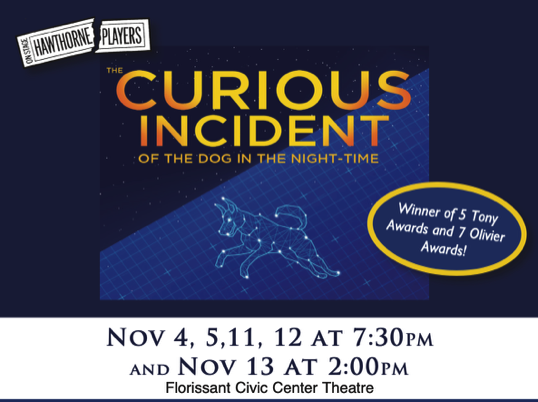 PLEASE NOTE:  The Curious Incident of the Dog in the Night-Time is fictional and is based on imagined characters and events. The show contains references to or staging of a dead dog, violent behavior, domestic violence, meltdowns, and sensory overload. The production contains high intensity video and lighting effects, haze effect, loud sounds including white noise, strong language, and swearing. These effects mostly happen at the beginning and second half of the show but also at other times during the show. We suggest bringing ear defenders if you are sensitive to loud noises. May not be suitable for young children.